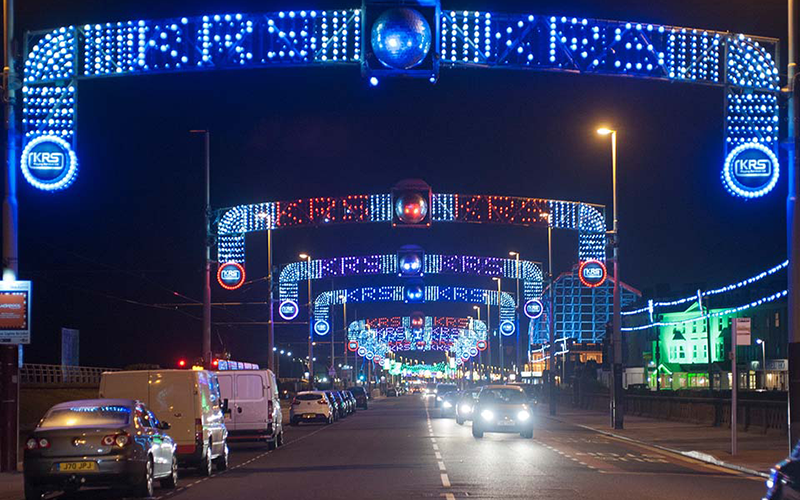 Announced today, KRS will sponsor the mirror ball arches which welcome people into Blackpool at the south end of the Illuminations. Founded in Blackpool they have been sponsoring the Blackpool Illuminations now for over 5 years.

The section located between Solaris Centre to Abercorn Place on South Promenade will feature eleven steel arches that will dominate the highway. Made from LED festoon and featuring the iconic glitter ball that empathises Blackpool’s long standing ballroom dance history.

“We feel incredibly honoured to be able to support the Blackpool Illuminations once again. It’s a great asset to the town, steeped in history and attracting millions of tourists every year. It’s crucial that as a business that was founded in Blackpool we contribute to sustaining our local economy”.

Sven originally sponsored the Illuminations in 2013 after his children were fascinated by the draw of the bright lights. Ever since that day he’s been a continued supporter of the UK’s greatest lightshow.

“We have said many times that business support for the Blackpool Illuminations is critical if we are to continue to provide this iconic attraction for generations to come – and we really do appreciate the ongoing support of those businesses that continue to invest.”

KRS has built up a reputation as one of the UK’s leading rigging companies. From Justin Timberlake to Jay-z, Ed Sheeran to Taylor Swift. They have established themselves as a trusted supplier within the live entertainment industry, operating for over 20 years.

By sponsoring the Blackpool Illuminations, they support and invest in the local economy securing its future for younger generations to enjoy.

The Blackpool Illuminations will shine bright this year between 31st August – 4th November 2018. For further information, including switch-on times go to www.visitblackpool.com/illuminations